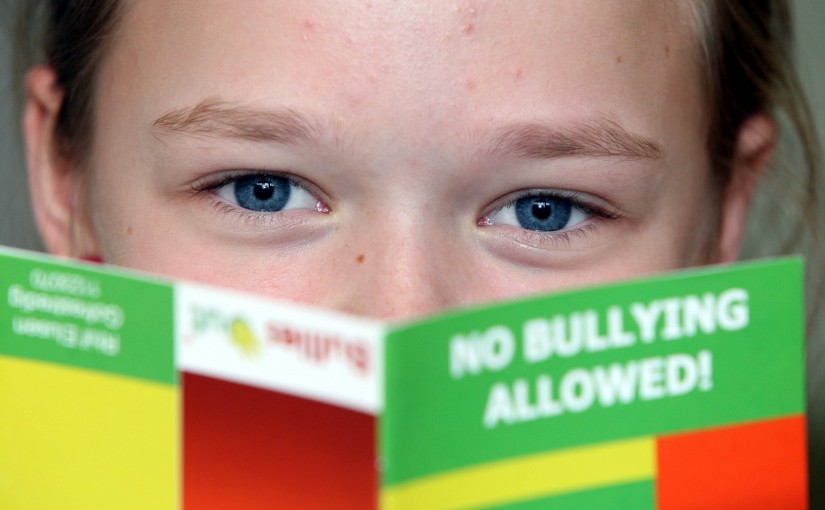 Put simply, bullying is when one child picks on another child. Bullying is defined as any unwanted, aggressive behavior from one or more children, toward another child or children. Bullying is often not an isolated event, but rather is repeated, or has the potential to be repeated.

Bullying can happen in various ways – physically, verbally or socially. It can take place anywhere – at school, on the bus, over the internet or even via texting. Bullying often involves an imbalance of power – whether it is real or perceived – leaving the victim feeling intimidated and inferior.

There are three main types of bullying which occur:

This can include teasing, name-calling, taunting, making inappropriate comments or verbally threatening. This can occur orally or through written messages on the internet or via mobile phones

Social bullying relates to bullying which affects a child’s social relationships. This might include attempts at damaging a child’s reputation by spreading rumours, leaving someone out in an attempt to isolate them or making public attempts to embarrass them.

Physical bullying relates to hurting a child physically, or even hurting their possessions. Physical bullies may use aggressive physical behavior such as hitting or kicking to hurt a child, they might try and induce physical harm by tripping someone or pulling their chair out etc., or may simply use rude hand gestures toward them.

National studies show that almost 30 percent of children are bullied, with cyberbullying becoming the fastest growing method of delivering the bullying behavior. Children who are bullied as well as children who bully are both at risk for very serious, lasting problems. Whether your child or student is being bullied or they are doing the bullying, it is a serious issue which needs to be addressed as soon as possible.

When Your Child or Student Is Bullied

Children who are bullied often feel vulnerable and powerless to their situations. If the bullying has been happening for some time they are often conditioned to feel different and alone.
Children who are bullied are often unable to stand up for themselves because the power imbalance that occurs in bullying can leave them feeling that they are not as powerful as the bully. Victims of bullying often exhibit behaviors such as appearing anxious or nervous, feeling sick or not doing as well at school as they usually do. If your child or student is acting differently, try and find out if they are being bullied. If they are, make sure the school and teachers are aware of the problems, and try the following tips in order to help the child deal with the situation:

·        Ask what he or she needs to feel safe and be clear that you are there to help
·        Teach the child to respond by looking the bully in the eye, standing tall and remaining calm. Teach them to walk away with their head held high.
·        Teach the child how to address the bully in a firm voice. Saying things like “I don’t like that” and “Please do not speak to me like that” can be helpful in confronting the bully about his or her behavior.
·        Ensure that the child knows who they can speak to about being bullied – trusted adults, teachers etc.
·        Develop a plan of action – be sure to communicate openly with the school and plan some steps that can be taken in order to resolve the situation. Consider what changes could be made to help (rearranging the classroom, switching bus route etc.)

Most importantly, be sure you support the child who is being bullied. Listen to what has been happening and focus on how the child is feeling. Assure the child that what has been happening is not their fault and that they are not alone – lots of other children have struggled with this problem. If your child is not willing to talk about it or is having difficulty opening up, think about who else might be able to speak with them about it – consider a school counsellor or other mental health service.

Don’t forget to be persistent – the issue may not resolve itself overnight. You will need to commit to ensuring that the bullying stops and support the child until it does.

When Your Child Is the Bully

Kids can exhibit bullying behavior for a number of reasons. This may include copying friends or trying to look ‘cool’, bullying in order to make themselves feel better or more powerful than the child they are bullying or even as a reaction to other circumstances in their lives such as problems at home. Whatever the reason – bullying is never acceptable. Studies have shown that children who bully often encounter problems as adults, including substance abuse, getting into fights and leaving school early.
If your child or student is responsible for bullying, it is important to address it right away – for the good of the child being bullied, and the bully. Here are some tips for addressing bullying with the child who is carrying out the bullying behavior:

·         Ensure that the child knows what it is they are doing wrong. In some cases, children don’t even realise how what they are doing is wrong or how it hurts people. Be specific – point out why it’s wrong and how it affects the child being bullied.
·         Be serious. Bullying is not a joking matter – make sure your child or student knows that you are taking the issue very seriously and that any continuation of the behavior will not be tolerated.
·         Speak with the child and try to get to the bottom of why he or she might be doing the bullying. Consider whether he or she might need some additional support from the school counsellor or another outside organisation.
·         Let the punishment fit the crime. Children who bully should not simply be let away with it – use consequences but ensure that they are appropriate and help the child to learn about bullying (you might consider having the child make an anti-bullying poster to paste around the school, or write a story about the effects of bullying on other children).
·         Make sure the child who bullied is involved in repairing the situation they have caused. This might mean writing a letter of apology or replacing any property that was damaged.

When Your Child Is a Bystander

If your child or student is merely a witness to bullying, there are still things to be aware of. Children who witness bullying may feel helpless or worried for another child’s safety, or their own. They may start to join in the bullying or they may not tell anyone about the bullying if they are feeling anxious that they will be bullied. Encourage children who are bystanders to tell an adult as soon as possible about the bullying and to help support bullied children.

Even being a bystander to bullying can affect children very negatively. Make sure they know that it is okay to speak out.