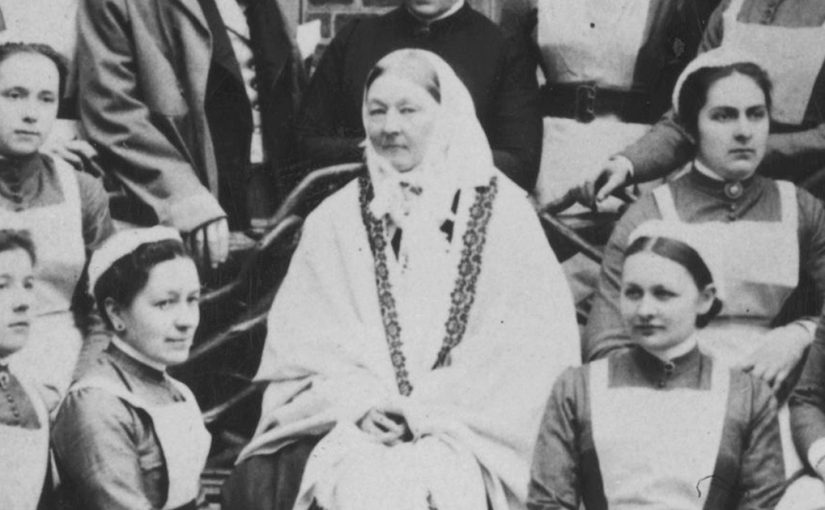 She is a “ministering angel” without any exaggeration in these hospitals, and as her slender form glides quietly along each corridor, every poor fellow’s face softens with gratitude at the sight of her. When all the medical officers have retired for the night and silence and darkness have settled down upon those miles of prostrate sick, she may be observed alone, with a little lamp in her hand, making her solitary rounds.

This ministering angel was Florence Nightingale, and the story told is of her tireless efforts to improve unsanitary conditions and reduce the death rate for the wounded during the Crimean War in the mid-1800s. National Nurses Week — May 6-12 — was inspired by her legacy and ends on her birthday (May 12, 1820), and recognizes the contributions that nurses and nursing make to the community.

Affectionately known as The Lady with the Lamp because of the stories of her rounds by lamp light, Nightingale’s influence is widespread — from hospital ward designs to the adoption of a healthy diet in patient recovery efforts, she made a profound impact on the healthcare industry and is considered the pioneer of modern nursing.

Born to a wealthy family during the Victorian Era, Nightingale received her calling to nursing early in life, having ministered to the ill and the poor in the village from a young age. She believed the career to be her “divine purpose.”

But her parents did not agree. They believed she should marry a man of social stature in England, instead of following her dream to help others in a role they considered menial labor. Nightingale turned down such an offer of marriage in 1849, and, determined to pursue her desire, enrolled as a nursing student at the Institution of Protestant Deconesses in Germany.

Her most famous contribution to nursing was during the Crimean War. She, along with 38 other volunteer female nurses she trained, was sent to the Ottoman Empire in 1854 after Britain received dismal reports of conditions for the wounded. Nightingale is credited with reducing the death rate from 42 to 2 percent at the war hospital where she worked by implementing hygiene practices or calling for sanitary conditions to be improved.

Her contributions during the Crimean War were celebrated with the establishment of the Nightingale Fund for nurse training, which received generous donations. With those funds, she founded the Nightingale Training School at St. Thomas’ Hospital, now called the Florence Nightingale Faculty of Nursing, Midwifery and Palliative Care, part of King’s College London, and has published a number of works that are still influential in the healthcare industry.

Honor nurses in your community

There are so many Florence Nightingales working in our communities, inspiring and helping others by the light of their lamps. Whether you simply write a note to thank them for their dedication and care, or provide them with small tokens of your appreciation (check Pinterest for some great ideas — hand sanitizers with custom tags, or mini lamps for their workstations would be perfect Nightingale-themed gifts), make sure to mark your calendars for May 6-12.

Celebrate the “Service • Passion • Dedication” of your facility’s nurses with these our colorful word cloud T-shirts. They’re available until March 15!